A collection of mason jars filled with preserved foods

A Mason jar, named after John Landis Mason who first invented and patented it in 1858, is a molded glass jar used in home canning to preserve food. The jar's mouth has a screw thread on its outer perimeter to accept a metal ring (or "band"). The band, when screwed down, presses a separate stamped steel disc-shaped lid against the jar's rim. An integral rubber ring on the underside of the lid creates a hermetic seal. The bands and lids usually come with new jars, but they are also sold separately. While the bands are reusable, the lids are intended for single use when canning. Largely supplanted by other products and methods for commercial canning, such as tin cans and plastic containers, glass jars and metal lids are still commonly used in home canning. Mason jars are also called Ball jars, in reference to the Ball Corporation, an early and prolific manufacturer of glass canning jars; fruit jars for a common content; and glass canning jars a generic term reflecting their material. Lightning fruit jars, another type of Mason jar, was not as common as the screw-thread version, but they were popular for home canning in the late nineteenth and early twentieth centuries. 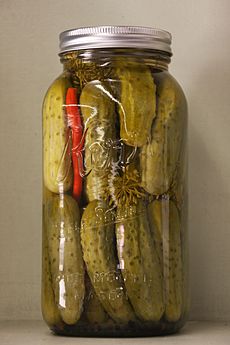 Among the most common U.S. brands of Mason jars are Ball, Kerr, and Golden Harvest. Jarden Corporation, based in Boca Raton, Florida,[1] retains the license to use the Ball and Kerr registered trademarks on home-canning products as a part of its branded consumables business.[2] At one time Jarden also may have had a license to use the Golden Harvest brand; however, Jarden’s website did not list Golden Harvest as one of its brands as of March 2016.[3][4] In Canada, Bernardin, which is another division of Jarden, is the most common brand; Golden Harvest is also available.Template:Citation needed Jarden offers its Canadian jars in metric volumes of 125ml, 250ml, 500ml and 1 litre.

File:Mason-jar-lids.jpg
Mason jar lids and bands. The integral soft rubber ring on the underside of the lid seals onto the rim of the jar during processing.

Template:Main In home canning, food is packed into the jar, leaving some empty "head space" between the level of food and the top of the jar. The lid is placed on top of the jar with the integral rubber seal resting on the rim. A band is screwed loosely over the lid, allowing air and steam to escape. The jar is heat sterilized in boiling water or steam and the lid is secured. The jar is then allowed to cool to room temperature.

The cooling of the contents creates a vacuum in the head space, pulling the lid into tight contact with the jar rim to create a hermetic seal. Once cooled, the band is removed to prevent residual water between the jar threads and the lid from rusting the band. If the jar seal is properly formed, internal vacuum will keep the lid tightly on the jar. Most metal lids used today are slightly domed to serve as a seal status indicator. The vacuum in a properly sealed mason jar pulls the lid down to create a concave-shaped dome. An improper or failed seal or microbial growth will cause the dome to pop upward.

Among the earliest glass jars used for home canning were wax sealers, named in reference to the sealing wax that was poured into a channel around the lip to secure a tin lid. This process, which was complicated and error-prone, became popular in the late 1830s or early 1840s and was commonly used for sealing fruit jars from the early 1850s until about 1890. The wax sealing process was largely the only one available until other sealing methods were developed,[5] and widely used into the early 1900s.

By far the most popular and longest used form of closure for the glass canning jar was a zinc screw-on cap, the precursor to today's screw-on lids. It usually had a milk-glass liner, but some of the earliest lids may have had transparent glass liners.[5] In 1858, a Philadelphia tinsmith named John Landis Mason (1832–1902) invented and patented a screw finish glass jar or bottle that became known as the Mason jar (U.S. Patent No. 22,186.)[6][7] From 1857, when it was first patented, to the present, Mason jars had hundreds of variations in shape and cap design.[5] After it was discovered that Mason's patent had expired, many other manufacturers produced glass jars for home canning using the Mason-style jar.[8] "Patent Nov 30th 1858," signifying the date of Mason's patent, was embossed on thousands of jars, which were made in many shapes, sizes, and colors well into the 1900s. Since they were made in such quantity and used for such long periods, many of them have survived to the present day.

Between 1860 and 1900, many other patents were issued for Mason jar improvements and closures.[9] The more esoteric closures were quickly abandoned, and thus can fetch high prices in today's antique market.Template:Citation needed Mason applied for and received a United States trademark, which was registered on May 23, 1871, as U.S. Trademark no. 276.Template:Citation needed Letters of patent issued to Mason on May 10, 1870, for improvements to his fruit-canning jar was determined to be invalid as a result of a patent infringement case brought before the Southern District of New York on June 11, 1874. The court acknowledged that Mason had invented the jar in 1859, but he did not apply for a patent for an improved version of the fruit jar until 1868. In the meantime, several others had patented designs and Mason had known these jars were being produced and sold. The court ruled that Mason's delay in protecting his patent indicated he had abandoned his invention in the intervening years between 1859 and 1868 and had forfeited his patent. The court's decision allowed other manufacturers to patent, produce, and sell glass jars for canning.[10]

One of the more popular styles of closures for the Mason jar was the wire bail. The closure consists of a metal wire arrangement with a lever that applies leverage to a glass lid when pivoted downward against the side of the jar, clamping it down over a separate rubber O ring. The bail-style jars are still widely used in Western Europe, particularly France and Italy, where the two largest manufacturers (France's Le Parfait and Italy's Bormioli Rocco) produce the Le Parfait and Fido brands, respectively. While bail-type jars are widely available in the United States, they are generally marketed there exclusively for dry storage and only rarely used for home canning.Template:Citation needed

On January 5, 1875, Charles de Quillfeldt of New York City invented a wire-bail closure known as the Lightning closure. Within a short time he sold the patent rights to several individuals, including Henry Putnam and Karl Hutter. The stopper or lid was typically made from metal, porcelain, or ceramic, while a rubber gasket was used to seal the container. Putnam modified de Quillfeldt's design so that the lid was secured by centering the wire bail between two raised dots or in a groove along the lid's center. Putnam's closure was patented 1882 (U.S. Patent #256,857).[11]

De Quillfeldt used the term "Lightning" to refer to the sealing method, but the closure's popular use on fruit jars led to the name, Lightning fruit jar. The sealing surface on the jar was a "shelf" that supported the lower edge of the lid. A rubber gasket between the shelf and the bottom surface of the lid formed a secure seal when the wire closure was tightened. Although Lightning jars were popular for home canning use from the early 1880s to the early 1900s, they were not as common as screw-thread Mason jars.[11] The first U.S.-made brand of jars to use this type of closure was embossed with "Lightning" on the side.Template:Citation needed

A new type of Mason jar known as a "bead" jar was introduced around 1910 to 1915. These continuous screw-thread jars were designed with a bead between the screw threads and the shoulder as a sealing surface. The Ball Perfect Mason jar, one of the most common jars of this style, was introduced around 1913 and produced until the mid-twentieth century. It had several variations, including a square-shaped jar.[5][12] During the twentieth century, bead jars were sealed with two-piece metal lids. The jar lid had a rubber or rubber-like sealing surface and was held in place by a separate metal band. This type of jar and closure, which first became popular in the late 1910s and 1920s, is still in use.[5]

The decline in Mason jar manufacturing in North America is due to several factors: the lack of U.S.-based manufacturers of bail-closure jars since the early 1960s, a sharp decline in popularity of home canning in the 1950s and 1960s, consolidation of the U.S. canning jar industry, and the resulting higher cost of imported European-made jars.Template:Citation needed The Ball Corporation, who once dominated the market as the largest domestic manufacturer of home-canning jars, no longer produces Mason jars; it exited the home-canning business in 1993.[13][14]

Older styles of home canning jars are "Not Recommended" by the U.S.-based National Center for Home Food Preservation, the United States Department of Agriculture, and University Extension Services. These include: (A) those using a zinc cap and a rubber jar ring, and (B) those using a glass lid, wire bail, and rubber sealing ring. These provide "no definitive way to determine if a vacuum seal is formed."[15]

Antique canning jars are often sold through antique stores and auction sites such as eBay.Template:Citation needed The value of a jar is related to its age, rarity, color, and condition. A jar's age and rarity can be determined by the color, shape, mold and production marks of the glass, and the jar's closure. Mason jars usually have a proprietary brand embossed on the jar. Early jars embossed with "Mason's Patent November 28th 1858" that date from the late 1850s to early 1860s closely match the illustrations of Mason's 1858 patents. Mouth-blown jars embossed with a version of "Mason's Patent November 28th 1858" were made about 1857 to 1908. By 1908 semi-automatic machines manufactured the majority of these jars. Machine-made Mason jars that originated around 1909 have a sealing surface on a bead ledge below the threads. This type of jar dominated the market by the mid to late 1910s. Manufacturers continued to make jars with the beaded seal after the mid-twentieth century.[5] Ball's "Ideal" canning jar, which first appeared around 1915 and was discontinued in 1962, is one of the company's best-known jars and is popular among collectors.[16]

Colored jars were considered better for canning because the color blocked some light from reaching the food, which helps to retain flavor and nutritional value longer.Template:Citation needed Most antique jars that are not colorless are aqua or "Ball blue," a blue-green shade that was named for the Ball Corporation, a prevalent jar manufacturer. Most mouth-blown Mason jars embossed with some type of 1858 patent date were produced in aqua glass. The Ball brand of Mason jars were manufactured in several colors, but the most common color was the distinctive "Ball blue," which the Ball Corporation used in its jars from about 1910 to 1930. Mason jars with this particular color of glass may be attributed to Ball, since "virtually no other bottle or jar was made in that color."[5] More rarely, jars will turn up in amber, and occasionally in darker shades of green. Rarer still are cobalt blue, black, and milk-glass jars. Some unscrupulous dealers will irradiate jars to bring out colors not original to the jar.Template:Citation needed