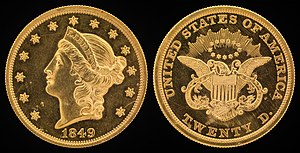 The 1849 liberty head design by James B. Longacre

The "eagle", "half eagle", and "quarter eagle" were specifically given these names in the Act of Congress that originally authorized them ("An act establishing a mint, and regulating coins of the United States", section 9, April 2, 1792). Likewise, the double eagle was specifically created as such by name ("An act to authorize the coinage of gold dollars and double eagles", title and section 1, March 3, 1849).

The first double eagle was minted in 1849, coinciding with the California Gold Rush. In that year, the mint produced two pieces in proof. The first resides in the Smithsonian Institution in Washington, D.C. The second was presented to Treasury Secretary William M. Meredith and was later sold as part of his estate—the present location of this coin remains unknown.

In 1850, regular production began and continued until 1933 (when the official price of gold was changed to $35/oz by the Gold Reserve Act). Prior to 1850, eagles with a denomination of $10 were the largest denomination of US coin. The $10 eagles were produced beginning in 1795, just two years after the first U.S. mint opened. Since the $20 gold piece had twice the value of the eagle, these coins were designated "double eagles". In 1850, the double eagle had the purchasing power of $1200 today.Template:Citation needed

Template:Multiple image Template:Main article Due to the less desirable artwork and therefore lower demand, liberty coronet $20 gold pieces are less often encountered, and the common subtype commands less than the St.-Gaudens' type. In 1866, the motto "In God We Trust" was added to the liberty coronet double eagle, creating a second subtype. In 1877, the coin's denomination design on the reverse was changed from "twenty D" to "twenty dollars" creating a third and final subtype for the series. An 1879 pattern coin was made for the quintuple stella using a design combining features of the liberty head double eagle and stella pattern coin and using the same alloy as the stella (90 parts gold, three parts silver, and seven parts copper). However this coin was stolen in July 2008.Template:Citation needed

Side of the 1907 "high relief" double eagle showing edge lettering and surface detail.

The Saint-Gaudens double eagle is named for the designer, Augustus Saint-Gaudens, one of the premier sculptors in American history. Theodore Roosevelt imposed upon him in his last few years to redesign the nation's coinage at the beginning of the 20th century. Saint-Gaudens' work on the high-relief $20 gold piece is considered to be one of the most extraordinary pieces of art on any American coin. The mint eventually insisted on a low-relief version, as the high-relief coin took up to eleven strikes to bring up the details and did not stack correctly for banking purposes. Only 12,367 of these coins were struck in 1907. These coins easily top the $10,000 price in circulated grades, but can reach nearly a half million dollars in the best states of preservation.

There were several changes in the early years of this design. The first coins issued in 1907 design featured a date in Roman numerals, but this was changed later that year to the more convenient Arabic numerals. The motto "In God We Trust" was omitted from the initial design, as Roosevelt felt that putting the name of God on money that could be used for immoral purposes was inappropriate. By act of Congress, the motto was added in mid-1908.

The design of the Saint-Gaudens coin was slightly changed once more when New Mexico and Arizona became states in 1912, and the number of stars along the rim was accordingly increased from 46 to 48.

Double eagles were routinely minted through 1933, although few of the very last years' coinages were released before the gold recall legislation of that year. Accordingly, these issues (when the U.S. Treasury permits individuals to own them) bring very high prices.

The Saint-Gaudens obverse design was reused in the American eagle gold bullion coins that were instituted in 1986. The early 1907 double eagles and the 1986-1991 gold American eagles are the only instances of Roman numerals denoting the date on American coinage.

On January 22, 2009 the U.S. Mint released ultra-high relief double eagles using the deep design that Saint-Gaudens envisioned. It is one ounce of .9999 fine gold. Because of their higher gold content, and greater striking pressure, the coins are 27 mm wide and 4 mm deep (the same diameter as a gold eagle), rather than the 34 by 2 usual for double eagles and bullion coins. The initial selling price was $1239. With the rising price of gold by June it had climbed to $1339, and by December to $1489. There was no limit on the coinage of these one time uncirculated issues, which bear the date "MMIX".[1] In September, the one coin per person ordering restriction was removed. The final mintage was 115,178.

The Smithsonian specimen of the 1933 Saint Gaudens double eagle

In 1933, President Franklin D. Roosevelt stopped the coinage of gold and made it illegal to own the metal (although coin collectors could retain their pieces). With one exception, no 1933 double eagles were ever legally released, although some were stolen from the government, and over the years several were recovered.

In the summer of 2002, a 1933 double eagle was auctioned off for $7,590,020[2] US, which shattered the old record of $4,140,000 paid at a public auction for an 1804 silver dollar. This piece is unique as the only 1933 double eagle the U.S. government has deemed legal for its citizens to own (having been negotiated as such through terms of a U.S. treaty with a foreign government)Template:Citation needed. Even illegal instances of the 1933 double eagle could be worth hundreds of thousands of dollars, but it would be illegal for a U.S. coin dealer to broker a deal with one of these coins. There is no other date of St.-Gaudens double eagle that is worth a significant fraction of this extraordinary coin. A complete uncirculated set of all other St.-Gaudens double eagles could be put together for just over three million dollars (less than half the price paid for the 1933), including the extremely rare, ultra-high relief, proof pattern. Without the rare pattern, the set would be less than $750,000.

In August 2005, the United States Mint recovered ten 1933 double eagle coins from a private collector who had contacted the United States Mint to ascertain their authenticity. Joan S. Langbord claimed that she inherited the coins from her father, a suspect in their original theft in 1933, and had found them in a safe deposit box in 2003.[3] The Mint announced that it would consider saving the coins for display. Meanwhile, Langbord filed a federal suit to recover the coins after her hopes of receiving monetary compensation from the federal government were not realized.[4] In September 2009, a federal judge ruled that the government had until the end of the month to return the confiscated coins to the Langbord family, or to prove that they had indeed been stolen.[5] On 20 July 2011, a civil-court jury awarded ownership of the ten coins to the U.S. government on grounds that the coins were stolen from the mint.[6] However, on April 17, 2015, the United States Court of Appeals for the Third Circuit in Philadelphia overturned the jury's decision and ruled that the ten 1933 double eagles did indeed belong to Joan S. Langbord and that they must be returned to her family by the U.S. Mint. The appeals court returned the coins to the Langbords because U.S. officials had not responded within a 90-day limit to the family's seized-property claim.[3] The full appeals court reversed its earlier ruling and allowed the government to keep the coins.[7]