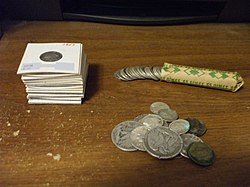 Junk silver in the form of Pre-1964 US Coinage. From top left: Silver dimes in paper holders, a roll of dimes and a mixed-loose lot of half dollars, quarters, dimes and "wartime" nickels.

Junk silver is an informal term used in the United States, United Kingdom, Canada and Australia for any silver coin which is in fair condition and has no numismatic or collectible value above the bullion value of the silver it contains. Such coins are popular among people seeking to invest in silver, particularly in small amounts. The word "junk" refers only to the value of the coins as collectibles and not to the actual condition of the coins; junk silver is not necessarily scrap silver.[1]

Precious metals including silver are measured in troy ounces (ozt). A spot price for silver is the price for a troy ounce of silver which is 99.9-percent pure, or 999 fine. Silver coins including junk-silver coins have set silver-alloy contents ranging from 35-percent to 90-percent or more. The term "coin silver," for example, refers to 90-percent silver alloy which was the most common alloy used to mint silver U.S. coins.

Canadian dollar, half-dollar, quarter and dime coins minted after 1919 and before 1967 contained 80-percent silver. Those minted 1919 or earlier are sterling (92.5%) silver.[5] For these coins (1920 - 1966), every CAD$1.00 in face value contains 0.6 troy ounces of silver. The 1967 and 1968 quarter and dime were also minted in 50-percent silver. 1968 also introduced the 100-percent nickel versions of all the coins mentioned beforehand. To tell the 1968 nickel and silver coins apart, the ones made from nickel are magnetic whereas the silver coins are not.

Junk-silver coins may be a desirable method of investing in silver for several reasons:

Low premiums
Coins can often be purchased for little or no premium over the spot price of silver, particularly during periods of economic stability.
Legal tender
Coins remain legal tender and maintain their face value regardless of the price of silver.
Recognition
Coins are familiar and less likely to have their value disputed than silver rounds or bars.
Divisibility
Coins can be easily spent or traded in small amounts. In contrast, minted silver bullion is rarely smaller than a troy ounce, while minted gold bullion (and other precious metals) is highly valued in even small amounts, like the American Gold Eagle coins.

For these reasons, junk silver is popular among survivalists. In the event of a crisis or catastrophe during which traditional currency collapses, it is speculated that silver coins could provide a viable alternative, temporarily or indefinitely, while fiat currency, which is not backed by precious metals or other commodities, has no inherent value and can be subject to extreme inflation, even hyperinflation, similar to Weimar Germany, post-WWII Hungary and, more recently, Zimbabwe. Proponents of junk silver and other precious metals claim that, while fiat currencies have historically been subject to hyperinflation, precious metals will always have inherent value and can act as a medium of financial exchange when fiat currencies are obsolete.